I hope that all is well with everyone. I don’t know about where you live, but old man winter is really letting himself be known today in North GA. As many of you know, Run for God has many exciting things happening over the next few months. We’ve got our 2015 Race Series that we will be rolling out, complete with 4 Virtual Races, Devotions is coming out soon, our new magazine Connect will be releasing in the next few days, and our Black Friday Sale is sure to be a huge hit!

Even though there are so many things going on, we are completely focused on two events that I’d like for you to join us in prayer about. 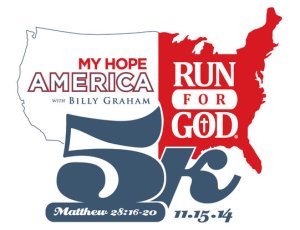 #1 The Free “My Hope America 5K”
This weekend, Run for God is hosting a completely FREE event for the general public in the North GA area. This event is being funded by the revenue generated from our 2014 National Race Series, and will be VERY different from any race that we have ever hosted.

The focus of this event is not the 5K, it’s not the awards, and it’s not Run for God. In fact, we are not even having an awards ceremony; instead participants who place in their age groups will simply collect their awards as they leave. The focus of this event IS a video that we will be showing after the race called “The Cross”. This 29-minute video is part of the Billy Graham – My Hope America series. Billy Graham does what he does best in this video, he points people to Christ in a very clear and simple way.

We have been promoting this event to the general public, in fact, we have even challenged Christians who will be running to reach out and invite those who do not know Christ. Because of this fact, we are expecting lives to be changed and souls to be saved, not by anything we may do, but by what we know God can do.

Will you join us in praying for all aspects of this race?

#2 The Release of “Devotions”
As many of you already know, Devotions is a new project that is releasing this month. This annual study is unlike anything we’ve ever released. Many people across the globe have been through the Run for God program, and many lives have been changed and even saved as a result of what God has done through these programs. But they are what they are, they are simply tools that we can use to point people to Christ.

People love the Run for God – Challenges because they are done in a small group setting and people are able to hold each other accountable both physically and spiritually. But what about those who, for whatever reason, would not join a Run for God – Challenge? Maybe they’re a veteran runner and feel like they don’t fit it, or there not comfortable starting something like this in a group setting, how about the possibility that they’re not a Christ believer and they’d never set foot in a church?

Our prayer is that this program will simply be another tool to reach lost people with the Gospel of Christ. Maybe someone who’s not sure about a “small group program” will pick this book up and be inspired both physically and spiritually by the stories in this book, YOUR stories! Maybe you know a runner who doesn’t believe all the “Jesus Stuff” and would never pickup a Bible much less step foot into a church. Could laying this book into their hands be the key?

Will you pray with us that Devotions will land in the hands of those who Need Christ?

Thank you in advance for your prayers, I KNOW they will make a difference!