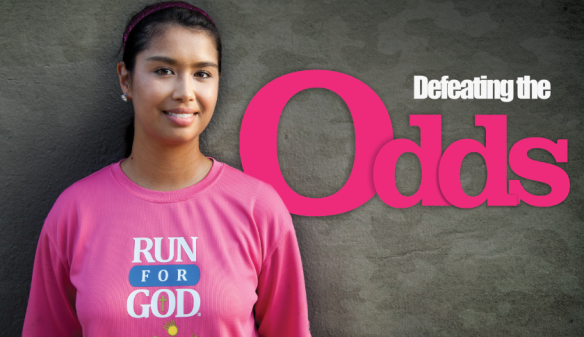 Have you ever felt as if the odds were against you? If you met Crystal Tucker she would list them one by one down to the first battle cry, but for the first time in her life, God has given her the desire to share her story and share how God removed her comforts and false securities from her life to remind her that He is the one and only source of strength.

In 2006, Crystal served as a 68W (Combat Medic) with the U.S. Army with the 32nd Medical Battalion stationed at Fort Sam Houston, Texas. In 2007, she was engaging in Afghanistan combat readiness training when something unexpected occurred. “During a 5-mile battalion run with my attending commander, I stumbled, and took a hard fall into a hole fracturing both of my legs,” says Tucker. Her injuries were much more serious than she imagined and resulted in fractures in both tibias, femurs as well as her hips.

Throughout her recovery, Tucker went through vigorous rehabilitation efforts while relying on ambulatory devices. She was evaluated by military physicians who assessed her with a permanent profile of a non-deployable status, which led to her honorable medical discharge. “Since I had what was called a ‘Permanent Profile’, I was considered non-deployable and of no use to the military,” she said sadly, “I could not run, jump, march correctly, or lift over a certain poundage.”

Upon receiving her medical discharge from the U.S. Army in April of 2007, she returned home to Georgia. “After returning home from the military, I rested for quite a bit, settled back into civilian life, completed my VA paperwork and got back into school,” Tucker said. And for the first time in several months, Tucker and her husband, Chris, received some good news and had a reason to celebrate – a new addition to the family. What Tucker did not expect were her injuries to return.

Throughout Tucker’s pregnancy, her symptoms became worse. “My legs would fall asleep to where I could barely walk. I had trouble sleeping due to the tingling in my legs. I developed arthritis and it became painful to leave my bedside and even participate in physical activity,” said Tucker. “After my son was born in February of 2008, I tried to exercise to help with the circulation of my legs, but decided to seek a vein specialist to correct my problems.”

After experiencing symptoms of numbness, pain and tingling, Tucker was evaluated by her doctor and was diagnosed with Venus Reflux Disease. “Basically,” Tucker said, “the blood flow – instead of making a complete circulation in my body, it was trickling back down.” Tucker’s physician best described her condition as a ‘leaky roof in her circulatory system’ and required her to have two separate surgeries, one on each leg, to correct and burn out the bad veins and reroute the blood flow. After the procedure and during a follow-up with her physician, told her she would never run again. Tucker did not lose hope.

“Those who hope in the LORD will renew their strength. They will sore on wings like eagles; they will RUN and not be weary, they will not walk and not be faint. (Isaiah 40:31)

If you have ever been in a place where you have been weary and tired, you have more than likely yearned for renewed strength. Being weary and tired can lead to discouragement and perhaps the desire to give up. It is in this place that we find it difficult to face life, to make decisions or to even take another step.

Tucker did not know what she would go on to accomplish after hearing that she could never run, not just from one, but from two different doctors– but through the Run for God program, God was able to show her that with Him all things are POSSIBLE. Tucker, now a Run for God graduate, found hope and strength during a time when others lost all hope and faith in her.

“When I think of Run for God, I can’t help, but smile,” says Tucker. “I am so passionate about this group and ministry and I will never think of running the same way again. With all of the odds that were stacked up against me, God lead me right where I needed to be,” she continues.

“I was looking through the newsfeed on Facebook when I came across a group that involved running and a Bible study,” she said. “At the time, I wanted to try out a Bible study, so I thought I would give it a try.” The class was a Run for God 10k/Half Marathon Challenge that began in January 2014 after the Run for God’s 10k/Half Marathon program release in December 2013. This challenge is a 12-week Bible study that parallels faith and endurance all while preparing experienced runners to run a 10k or half marathon.

“Once I entered the classroom, I was terrified about the decision I had made,” she said, “I mean, I have only completed a 5k since my injuries.” The class met three days a week for the training: Tuesday evening after the Bible study, Thursday evening, and Saturday morning. “The weather could not have been more cold,” said Tucker,

“I was bundling up as if I was heading to Alaska.” 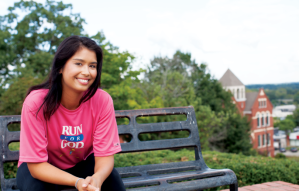 As the program continued, Tucker thought of all the odds stacked up against her, including not being able to run again. They began to cloud her mind until a 12-mile training run. “I was listening to K-LOVE for motivation to push through the pain of a long 12-miles when a verse from a song said, ‘you are the peace in my troubled sea,’” said Tucker. “It was in that moment, while I had been wanting to quit and wallowing in my pain that God was trying to tell me something. Not only had I come to realize that God had completely restored my health, transformed my life and gave me hope and the renewed strength I needed to run again, but also He wanted me to use it for His glory – I am to run to serve His purpose,” she exclaimed!

“I can still remember our graduation day just like it was yesterday,” Tucker says, “when I ran down the hill of Prater Mill Road, emotional, exhausted, turning the corner to run the last few kilometers. Then hearing the familiar sounds of my Run for God friends cheering and shouting, ‘GO, GO, GO! YOU CAN DO IT!!!’ and God whispering to me, ‘Run towards me.’ ‘Remember your purpose.’ ‘All finished.’ ‘You finished.’

“I am impacted greatly by this journey. It is still a journey. Despite the odds that were against me that should have demolished my future, instead lead me to not stand defeated. With God by my side, He helped me stand up to defeat the odds and to serve a purpose larger than myself,” said Tucker. So when the odds are not in your favor, don’t think that God has abandoned you. Stand your ground and keep your eyes fixed on the LORD. With everything else stripped away, you will be amazed at what your God can achieve.

3 thoughts on “Defeating the Odds!”